Mrs. Davis was born in Kalamazoo, Michigan and grew up near Frederick, MD. She chose to attend college at West Virginia University to play flute and piccolo in their award-winning marching band. Mrs. Davis met her husband, Bill, at WVU when they were both members of Alpha Phi Omega National Service Fraternity. After getting married, they moved to Wilmington so Bill could pursue a career in production design and art direction for film and television. He was nominated for an Emmy award for his work on season 1 of Stranger Things! They have two beautiful, talented daughters- Kaitlin and Sarah- who both graduated from East Carolina University with degrees in Dance Performance. Kaitlin and Sarah recently moved back to NC from Atlanta to open their own dance studio in Durham! 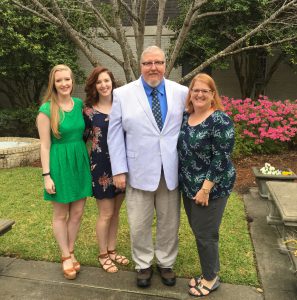