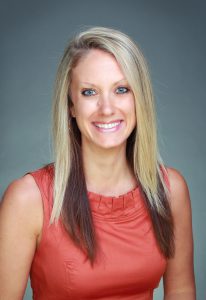 Lisa came to WAAS in 2013 from Pottsville, Pennsylvania, where she grew up and taught middle school science for six years. Recently, her class was featured in national news as she dropped student egg projects from a helicopter for a Physics experiment. She was also awarded Outstanding Middle School Coach of the Year in North Carolina for Science Olympiad in 2015 and has led our Science Olympiad team to a 2nd place in the state in 2019, advancing to the National tournament for the first time in WAAS history. She was recognized as the Air Force Association Cape Fear Chapter Teacher of the Year and the Air Force Association North Carolina State Teacher of the Year in Science, Technology, Engineering & Mathematics (STEM) in 2016.

She and her husband, Rob enjoy “island life” and taking on new adventures. They love to travel, surf, kayak, rock climb and hike together. They travel to PA often to visit both families – one in Pottsville, PA and one in Erie, PA. They have four nephews, Thomas (6), Nolan (2) and Henry (6 months) and a niece, Addison (4) and they take their aunt and uncle status very seriously!

Lisa grew up dancing, choreographing and competing professionally and partipated in the performing dance company in college. She held roles such as Clara in The Nutcracker and Sandy in Grease. She later taught dance for several years before pursing her Master’s degree. She hopes to pursue her doctoral degree someday.

We are pleased to offer relaxing and beneficial breathwork sessions provided by two certified Yoga instructors.  We believe that what our students learn and practice during these sessions will help them  in all aspects of their lives.  I am proud that we are able to...